A very short history and general introduction to shabti figures

A shabti, also known as an ushabti, is usually a small mummiform figurine found in many ancient Egyptian tombs.
They are usually made of blue or green glazed faience, but also occur in stone, pottery and wood, and the odd rarity in glass and bronze.
The meaning of the Egyptian term is uncertain, however one possible translation is ‘answerer’, as they were believed to answer their master’s call to work as servants in the afterlife.

Shabtis (also known as shawabtis or ushabtis) are small human figures, usually mummiform in shape, which were placed in tombs to replace and act as servants of the deceased in the afterlife.

There is debate around the origin of the name “Shabti”. It may have derived from the word “Swb” (“stick”) or “Shab” (the Persea Tree from which the first wooden Shabtis may have been carved). It has also been suggested that the name derives from the verbs “Sha” (“to command”) or “Shadj” (“to dig”). The later name “Ushabti” (used in the Late Dynastic Period) is generally thought to be derived from the word “wSb” (“answer”).

Shabtis were made from many different materials, most commonly faience, but also wood, stone, pottery, Nile mud, glass, wax and bronze.

The earliest known shabtis date to the Second Intermediate Period (circa 1782 - 1570 BC).

These are commonly referred to as Stick Shabtis – crude wooden sticks or pegs carved with very rudimentary features and usually inscribed in ink with the name of the deceased. They probably derive from Middle Kingdom servant figure groups, also placed also in tombs, which represented daily tasks such as bread-making, brewing or ploughing fields.

During the New Kingdom (circa 1570-1070 BC) the use of shabti figures became far more common.

The Egyptian economy as well as technology and art flourished during the early parts of this period leading to greater personal wealth and in turn a widespread use of shabti figures. These could now be mass-produced in faience or pottery and the wealthiest elite could commission the finest examples in stone, some tombs would contain hundreds of figures.

The most common inscriptions would contain the name of the deceased along with his or her title and perhaps their mother’s name but this period also saw the introduction of the “shabti spell”, also known as Chapter Six from the Book of the Dead:

Hail, Shabti. If the Osiris (name of the deceased) be decreed to do any of the work which is to be done in the Khert-Neter (i.e. the cemetery), let everything which stands in the way be removed from him; whether it be to plough the fields, or to fill the channels with water, or to carry sand from (the East to the West). “Here am I”, you shall say, “I shall do it”.

During the Third Intermediate Period (circa 1070 – 664 BC) the use of shabtis in burials became ever more popular.

The result of this was a general decline in quality accompanying the rise in output. It was not uncommon for a tomb to now contain 365 shabtis (one for each day of the year) and a further 36 “overseer shabtis” to direct this army of servants or slaves.

Some very fine blue faience shabtis with painted features and inscriptions do exist from this period though they were produced for royal or very high status burials. 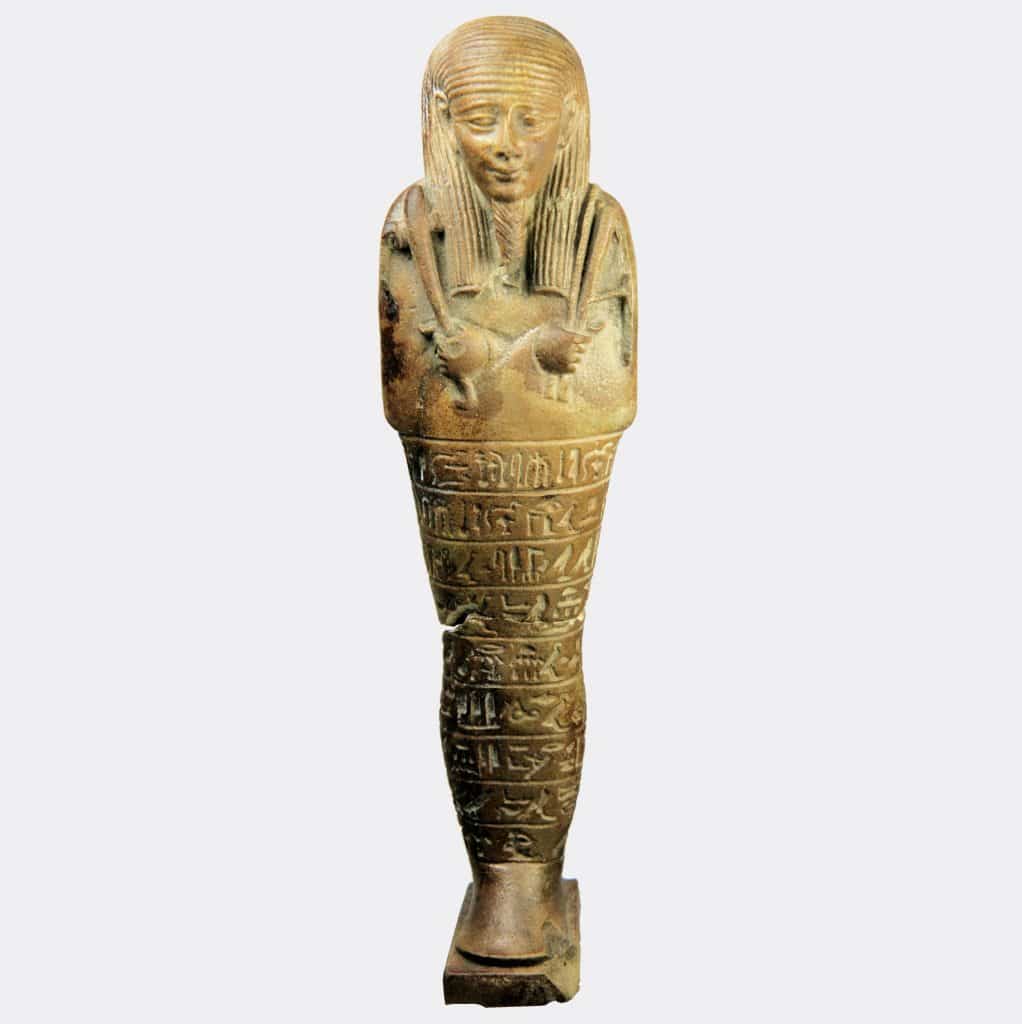 In the Late Dynastic Period (circa 664-323 BC) most shabtis were produced in faience.

Previously inscriptions had been painted onto the surface of the figure but technological innovations meant that these inscriptions could now be moulded into the figure during production. This technique allowed for mass-production of personalised shabtis yet many examples were produced to a very high standard.

The Ptolemaic Period( circa 323-30 BC) saw the decline of the use and also quality of shabtis.

Figures from this period are often more crudely moulded and generally of a smaller size also.
Shabtis are among the most recognisable ancient objects from Egypt if not antiquity.
Modern interest in these figures dates back to at least the 18th Century but firmly gripped the public imagination following Napoleon’s campaigns in Egypt (1798-1801) and the ensuing flow of “exotic curios” into Europe.
These enigmatic and often aesthetically pleasing figures remain one of the most popular subjects for collecting among antiquarians. Inscribed shabtis will not only reveal the name of the owner for whom they were commissioned but thanks to extensive records and research they can also often be traced back to their original tomb and date of excavation.

There is also an excellent catalogue on Niek de Haan’s website: http://www.shabticollections.com/

Read our guide to collecting, dealers, associations and more... 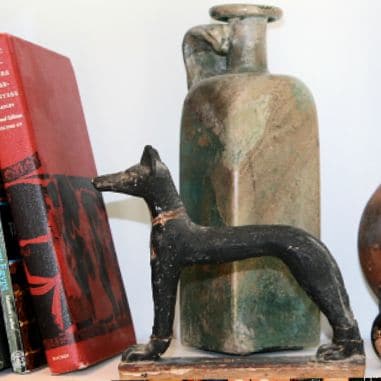 Read our advice on buyng, how to spot fakes and tips.

Read how we buy our stock, authenticate and research provenance

I have just received my first order from Helios. Very pleased with the item and I was impressed with the speedy despatch and the communication.

Thank you Alan, so glad you like the lamp Sam & Rolf 🙂

Having ordered my first item from Helios Gallery I am delighted with the service received. It makes such a difference dealing with specialists who are experienced archeologists in their own right and sell only genuine artefacts. Rolf went out of his way to help throughout and his freindly, knowledgeable approach was much appreciated and valued. What a very refreshing change from the often patchy reliability of many traders in ancient artefacts. I can recommend Helios Gallery without a second’s hesitation and will certainly be back.

Thank you Chris for this lovely comment, so glad your experience with us went so well, Sam & Rolf 🙂

Very helpful and knowledgeable service. The Egyptian amulet arrived quickly and was actually better than expected. More than happy to buy from these reputable dealers again.

Thank you Alex, great to hear from you again and glad you like the amulet 🙂 Sam & Rolf

Since my last review I have bought several further items from Helios. The quality of the antiquities was excellent and they offer such a friendly service. I’ve compared prices to similar items on sale from their competitors and all were more costly. The items arrived very quickly and were very well packed. I’m delighted, and 100% satisfied, will continue to buy from here. 5 stars!

Thanks again David, couldn’t be happier to read your lovely comments, Sam and Rolf 🙂

Well, I recently put in a review and I,’ve bought again. Two Greek pieces, superb quality and reasonable prices. Information excellent and delivery swift. I know of only one other dealer who can match this quality of item and service. When I’m buying, Helios will be the first place I’,LL look.

You have just put a big smile on my face, thank you David 🙂

Once again an excellent item from a very knowledgeable and friendly dealer.

I really like the idea of a Christmas sale ! I was very pleased with the items purchased.

Thank you Tony, we always try to get the smaller items on the website at several points during the year, it means new collectors can get a chance to acquire and admire the antiquities without having to part with lots of cash 🙂 Glad you like the seals, Sam and Rolf

Very happy with the piece I acquired and the friendly and professional service.

Thank you James, so glad you liked the blade and everything went smoothly, Sam 🙂

I’ve just bought an Isis/Horus amuket. It is 100% quality., I think the best in faience I’ve seen. It wasn’t expensive. I’ll continue to buy from Helios, every piece is authentic in an age where fakes flood the market. A big “well done”, guys!

Thank you so much David and glad you like the Isis and Horus amulet, it was a favorite of mine, Sam 🙂

A branch of Paradise

Precious things, affordable prices, and full confidence. In these times of falsehood and ugliness, Helios Gallery is a branch of Paradise.

Thank you Juan for your kind words, and we are delighted you are happy with our “Precious Things” 🙂 Sam and Rolf